A Museum of Interaction

Michael Rubenstein for The Wall Street Journal
Dr. Joseph Scelsa at the Italian American Museum in Little Italy. His almost continuous conversation with visitors makes the museum interactive.
Until I visited the Italian American Museum last week, I was unaware that Italians, among them the great Metropolitan Opera singer Ezio Pinza, were sent to U.S. detention camps during World War II, though in smaller numbers than Japanese-Americans. “He was at Ellis Island,” Dr. Joseph Scelsa, the museum's founder and a professor emeritus at Queens College, said as he pointed out one of the pink cards issued to detainees. “They had to carry them like identity cards. [Mayor] La Guardia was able to get him out after several weeks.”

The museum is housed in a three-story building at the corner of Mulberry and Grand that was once the Banca Stabile, an institution that opened in 1885 and provided not only traditional banking services but also arranged steamship passage for immigrants and found them housing and even jobs once they arrived. The museum opened at its current location in 2008. 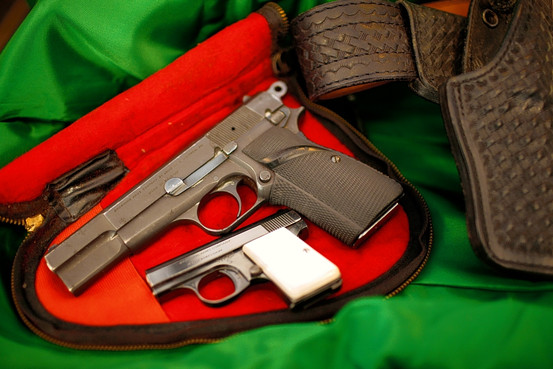 Michael Rubenstein for The Wall Street Journal
Frank Serpico's guns
There's a frankly hodge-podge cast to the exhibits—organ-grinder carts, hand-carved puppets, Frank Serpico's service revolver and a framed basketball jersey from the Knicks' Danilo Gallinari compete for space and attention with historical artifacts such as the $30 steamship ticket that brought a relative of movie director Francis Ford Coppola to the U.S. in 1903 and a “Black Hand” letter—an extortion note—sent to one of Dr. Scelsa's relatives in 1917. “We will burn the face of your daughter,” it reads in part, and for good measure it includes rudimentary drawings of skulls with daggers through them. “Probably stilettos,” Dr. Scelsa observed. “They were small gangs that existed at the turn of the century and used the cover of anonymity of the Black Hand. You'd be surprised how many people visit the museum and tell me similar stories.”

While a lot of money would undoubtedly go a long way toward bringing the Italian American Museum up to speed—Dr. Scelsa admitted that the recession threw the museum's fund-raising efforts a curve ball, and 7,000 items remain in storage—there's one arena where this quaint street-side institution may have more established institutions such as MoMA, the Met, and the Whitney beat hands-down: in terms of the holy grail of current museum design, interactivity. I don't mean talking exhibitions, video monitors or touch-screen computer displays (there's none of that), but in the almost continuous conversation between Dr. Scelsa and visitors to the museum who meander inside in ones and twos and share stories of their own families. I'd go so far as to say that the museum's main achievement thus far is to have created a space and an opportunity for Italian-Americans, like other established ethnic groups, to reminisce and honor their increasingly remote immigrant origins. 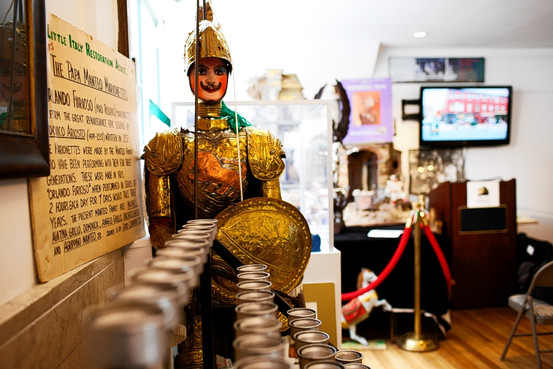 Michael Rubenstein for The Wall Street Journal
A puppet on display

Frank D'Aversa, one such museum-goer, remembered his father's stories of arriving in the U.S. in the 1920s, living on Sullivan Street and sharing a bed with two other men; one slept while the other two were off at work. His father, a union organizer, taught his kids to respect the cops even as his head was being bashed in. “The police were used as strike breakers,” Mr. D'Aversa said. “He said, 'You don't push somebody and don't expect them to push you back.' He did not resent the fact. It was a whole different mindset.”

Dr. Scelsa doesn't deny the darker and more cinematically explored side of Italian-American immigrant culture. After all, the infamous Ravenite Social Club, the former headquarters of the Gambino crime family, is just up the street. “I'm not sure what it's become,” he said of the club. “I don't think you're going to find anything like that around here anymore. Giuliani did a good job making sure those days were over.” 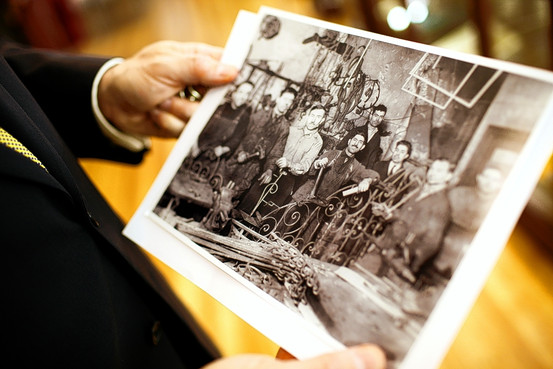 Michael Rubenstein for The Wall Street Journal
Historic photos.
But just in case tourists, who have replaced Little Italy's dwindling Italian-American population, continue to labor under the misapprehension that they may still witness a mob hit if their timing's right, Dr. Scelsa politely asked the poster shop next door to remove the “Scarface” and “Godfather II” posters from its sidewalk display. (It probably didn't hurt that the museum holds the lease on the poster shop.)

Roy Baxter, the shop's owner, said he had no problem abiding by the museum's request as he affectionately regarded a black-and-white glossy of John Gotti. Long gone, one suspects the Dapper Don still draws tourists to the neighborhood—and to the Italian American Museum. “He's too good looking to be outside,” Mr. Baxter said.